In a nutshell, the integrations brought two great improvements at that point:

But since my last article, a few important things changed in the product. Last week, the GA360 team released an outstanding case study (link to PDF) discussing how AccuWeather delivers enhanced value to advertisers with DoubleClick for Publishers and Google Analytics 360. Below is a descriptive scheme shared in the case study.

Besides the reporting capabilities already discussed in my previous article, the DFP integration enables deeper optimization opportunities with the Audience Sharing feature (beta), a way for publishers to share audiences they created using Google Analytics 360 data directly into DFP. These Audiences can then be used to target users that performed a specific task, read a specific type of content, came from a specific campaign, or any other information available on Google Analytics. You can do that either by building a segment on Google Analytics and building an audience out of it or by directly creating an audience and sharing it with DFP.

Below I discuss two use cases for this feature: optimizing ad serving by not showing some ads to some users (decrease impression waste) and providing better targeting based on user behavior (optimizing targeting).

It is very common to use DFP to serve house ads, which are intended to promote an action inside your website (as opposed to promoting an advertiser); this could be, for example, a registration for a membership or a page where you are trying to sell something. For Online Behavior, I used house ads to promote my book, showing an ad unit below every post on the website.

However, if a user had already visited the book page and clicked on one of the links to purchase it, I was wasting those impressions, and it would be more profitable for me to show Backfilled AdX ads instead of the book promotion to that group of users. Easy peasy!

The first step was to create an audience on Google Analytics including all users that have completed a goal of clicking on one of the book links on that page. Note that in the first step in the screenshot below I chose to share this audience with my DFP account. 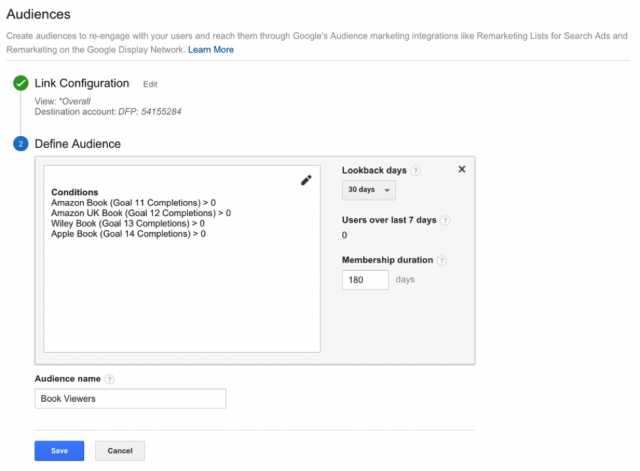 Once I finished creating this audience, I went on to DFP and edited my Book campaign line item to include a targeting criteria as shown in the screenshot below: Audience Segment is not Book Viewers. 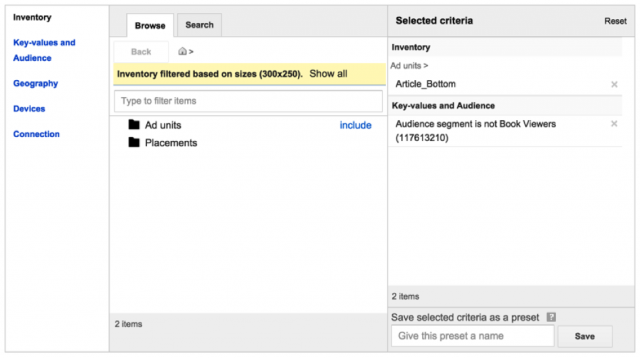 Voila! Users that clicked on the book links didn’t see the ads anymore, they saw AdX Backfilled ads, and that helped raising my revenue 🙂

Suppose you have a paid subscription along with content you provide for free to your readers. And suppose that you are currently using Google Analytics to measure those subscription transactions (you might as well use a Goal). That means you could identify which of your users are starting but not completing your subscription process. You could then create an Audience of all those users and remarket to them using house ads on your own website to try and engage them back with the funnel on future sessions. This would follow the same process described above.

Or suppose you are selling inventory to advertisers that are interested in people that care about sports. One simple technique would be to show the ads only on sports pages. However, some of your users that are interested in sports might visit the website sometimes and only look at the news section, but they are also interested in sports, just not on the current session. With Google Analytics Audiences, you could save “interests” across sessions, meaning that a person that is interested in sports will be part of a sports audience even if they don’t see a sports page in the current session. That would increase the amount of impressions you have available for sports fans.

Here is a similar example from the AccuWeather case study:

The integration between DFP and Analytics 360 is helping AccuWeather advertisers in other ways. For instance, one of its advertisers, a health related consumer product, wanted to survey users who had seen its ads on AccuWeather’s website. AccuWeather used Analytics 360 data to build a custom audience, blending those who had been exposed to that company’s ads on its website with location data to reach the right users.

AccuWeather shared this audience with its DFP account, which delivered the survey to that select audience. That’s how the advertiser learned that those who saw its ad on AccuWeather.com were actually 6.5 times more likely than the typical user to buy its product within the next 30 days. It’s not too surprising that this advertiser is making additional ad buys with AccuWeather this year.

Last, but not least, suppose you have sections of your website which are not very good at engaging your returning users, such as news articles. As in the previous paragraph, if you have different audiences for different interests, you could use DFP on the news articles to engage your users by showing them an interesting post based on their interests, this would keep them engaged with the website by providing them with targeted content.

If you are a Publisher, I am sure you are super excited about the opportunities this tight integration brings to your business. Happy analyzing / optimizing 🙂