A Conversation on Google Analytics Integrations

Last week, during the annual Google Analytics Summit in San Francisco, I had a conversation on stage with my colleague Kerri Jacobs, Head of Sales, Data and Analytics. We spoke about my recent book Google Analytics Integrations and the importance of integrating data in general. Kerri is an extremely smart, knowledgeable and fun person, which made the conversation really pleasant!

This article is a summary of most of the things we spoke about, Kerri asked the questions and I answered them, so the answers are mostly on first person.

Why are data integrations so important?

Last winter I traveled to the UK Lake District with my family, and we stopped at the Quarry Bank Mill, a Cotton Mill from the 18th century. We were walking around and learning about the weaving process, and the idea for the book intro came to my mind. It is amazing how the world of data is similar to the weaving process.

Basically, the weaving process has three main steps: raw cotton, threads and cloth. The raw cotton is pretty useless without treatment; threads are a bit more useful, they can be used to tie things up; but it is only when you weave the threads that you get something truly actionable, something that warms you, protects you, and makes you more beautiful. Below is an illustration showing how weaving works, where we have multiple parallel threads (the warps) that are interwoven by one single thread (the weft). 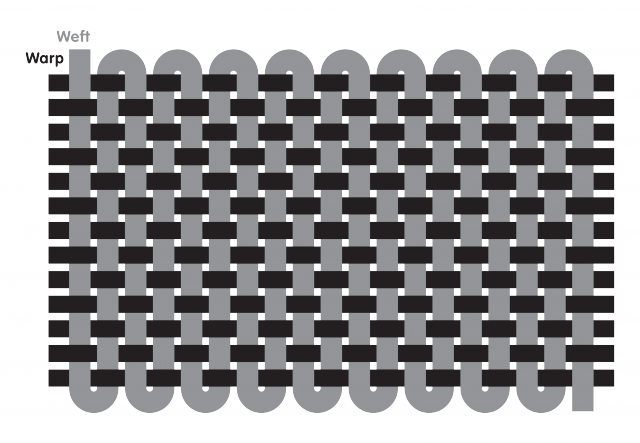 And the same is true for Analytics, raw data and datasets are not very useful; it is only when you manage to bring the data together into a centralized platform that you will be able to make meaningful decisions using it. In summary, I believe that Google Analytics can (and should!) be the weft of your business data.

What is the biggest challenge faced by companies that don’t have integrated data?

The other day I was talking to a colleague that used to be a Marketing Director at a large retailer. She told me that when she got the job she scheduled a meeting with all her teams where each of them presented their revenue numbers. At the end, she took a marker and summed up all the numbers in the white board: the result was twice the actual revenue. This is a great example of the damage siloed data can bring: if we look at data using different tools we are likely to be caught in this kind of scenario.

A good analogy is the Hindoo Fable of the Blind Men and the Elephant. Basically, the fable shows how six blind men each touch a part of an elephant, and each comes out with a different view of what this thing is: a wall, a spear, a snake, a tree, a fan, and a rope. As the conclusion goes:

So, oft in theologic wars
the disputants, I ween,
rail on in utter ignorance
of what each other mean,
and prate about an Elephant
not one of them has seen!

The same happens with data when you don’t have ONE source of truth, because every person in the company can look at a different source and come up with a different theory about what is going on.

How did you choose the integrations to cover in the book?

This was certainly the hardest thing about the book, I had several versions of the Table of Contents and after a lot of thinking I closed in on one, but halfway through the book I had to change it as the product was evolving in a different direction. It was quite stressing, but Wiley, my publisher, was pretty cool about it, which helped.

But one decision was pretty clear to me, to include only those integrations that bring data into Google Analytics, not out of it. I am a big fan of the tool’s visualizations and user interface in general, I think the whole design looks amazing. So I believe professionals should take advantage of that, because it makes a difference on how much people actually use data: if it is easy to use and pleasing to the eyes, people will be less threatened by it.

How do you actually make the integrated data actionable?

If we look closely at the value of integrated data, we can see amazing ways it empowers Google Analytics users to make decisions about how to better spend their marketing budgets and better monetize their digital properties. And some of this actionable data is now available only through Google Analytics, which is pretty amazing.

For example Remarketing, it is incredible that you can build remarketing lists based on online and offline behavior using the Measurement Protocol and Data Import. So, basically, you can bring data from your CRM systems about your users offline interactions (provided that they logged in or told you somehow who they are), and remarket to those people through Google Analytics and AdWords; this might result in better user experience and more successful advertising. In my opinion this is a deep and actionable integration!

Google Tag Manager (GTM) is absolutely awesome, and it is touching to see how passionate the community is about the product. And I think they are right to be passionate, because GTM really brings power and scale to the digital professional, it is an incredible tool.

One of the solutions featured on the book, contributed by Stephane Hamel, is the YouTube integration. The official integration only allows us to bring channel behavior into Google Analytics, how users behave inside a channel page. Unfortunately, this data is only a subset of the interactions that happen with video content. Using Google Tag Manager and the YouTube JavaScript Player API it is possible to expose user interactions with videos embedded in a website. For any video embedded in a website it is possible to see whether or not it was played and what percentage was watched by users.

With this data it is possible to create remarketing lists that include only users that watched certain videos on the website, such as a product or explanation video. Then you can use those lists to remarket to users through the Google Display Network to remind your potential customers about your great products.

Why is Data Import so important?

I believe Data Import (along with the measurement Protocol) is a critical feature in that it transformed Google Analytics from a tool to a platform. In the past, the tool was great for measuring interactions with websites and apps; but it was only when Google Analytics started offering the capability to upload/send custom data into it that it became a powerful and multi-purpose data platform.

One of the examples Corey wrote about is refund data, which I think is critical for data accuracy. You will be using Google Analytics data to optimize your campaigns and make actual decisions, and if some campaigns are bringing a lot of people that buy stuff just to return a few days later, you cannot afford to ignore this data; if you do so, you may do real damage to your business.

Corey also writes about Profit data; optimizing for revenue is sub-optimal, it is clear that if you know which products are the most profitable ones you will be in a better position to bring more money to the table. And Corey makes a great point when he writes that this is certainly something you should import through Data Import, otherwise you run the risk of your customers seeing it. This is a great point in general, as you should know what kind of data you will send through your code (which your users can potentially see) or through the Google Analytics interface, which is seen just by you and your team.

Benjamin focused on Cost Data. I think that’s just unbelievable that people use multiple platforms to decide on their marketing budget, it is so suboptimal! When you upload your cost data from other advertising platforms into Google Analytics you can not only compare between different campaign performances but you will also have a much deeper understanding about users coming from them.

What do you think people should be doing differently?

What’s one thing we can do right now to make an impact?

One of the things that became clear to me in the last few years is that we have to broaden our horizons if we want ourselves and our industry to move forward. When I joined Google, I was already a Google Analytics fan boy, I thought it was the biggest thing on earth and that everyone loves it. But that’s not true. There are whole ecosystems out there that don’t even know what Google Analytics is. And if we don’t go out and tell them how awesome is Google Analytics they will never know.

So one thing I believe we should all do is to think about all the products that can bring data into Google Analytics (DoubleClick, AdWords, AdSense, etc), choose one you don’t know anything about, and start learning about what it does, what data it collects and how you can use this data together with Google Analytics to make better decisions. Make a plan to learn it.

In the end of our chat, Kerri had the very cool idea to do a selfie with all the audience holding my book up (everyone got a copy). That was pretty nice 🙂 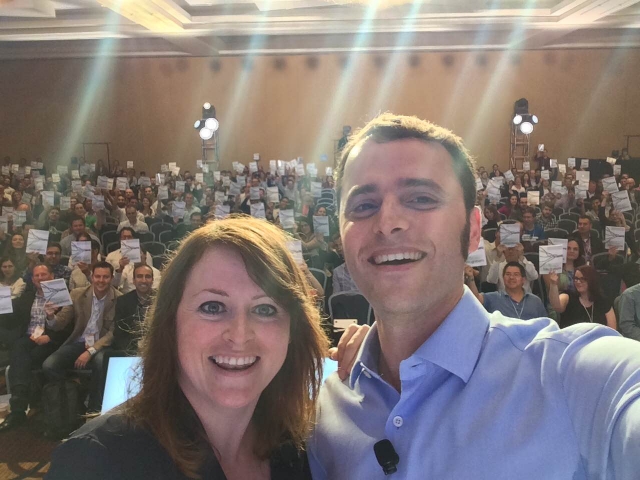